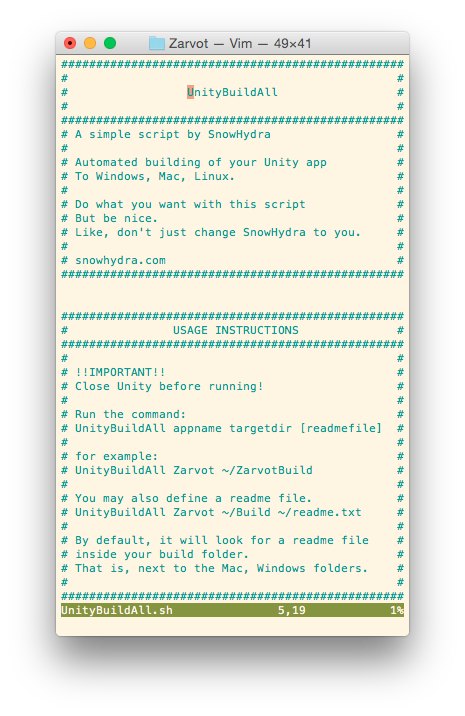 I finally cleaned up one of my personal scripts, and I think it’s ready for public usage. It’s the handiest script I’ve ever made, to be honest.

This script does two things:

1) It will build your last opened Unity project to Windows, Mac, and Linux.

2) It will neatly zip up each build.

Yes, it’s pretty simple, but very useful. Unfortunately this script is Mac-only for now. Perhaps in the near future I will write a batch file for Windows. You could also do it yourself and share it to me! I’m sure many people would love it.

If you’re unsure how to use this, you must make sure of a few things. You must have Unity installed. You must be on a Mac.

Replace “app_name” with your game’s name.

Replace “target_folder” with where you want the builds to go. By default, they will go to ~/UnityBuilds/appname/ (That’s in your user folder.)

Replace “readme_file” with any readme file you want to include in the zip.

9. Wait until you see the command prompt again, and then you’re done!

If you want to keep using the script file easily, I recommend “installing” it.

3. Rename the script to not have .sh at the end.

4. Copy the script to your bin folder (essentially where Terminal programs are stored.) You will need admin rights.

And that’s about it! Now, you can just run this script wherever you want. That means, to build your game, all you have to do is close Unity, open the Terminal, and run, for example:

I don't know who you are, where you are from, or what you are thinking.

But I do know that you like games. Why am I so presumptuous? What makes me so certain of this?